A working vending machine and artwork, which dispenses affordable pieces of art made in collaboration with The Mildmay Collective. Funded by the Arts Council England and the Cripplegate Foundation 2015. 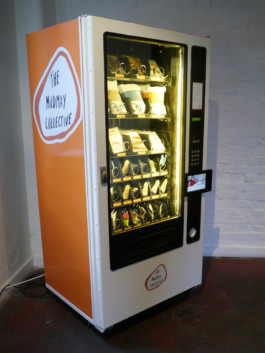 Vending Machine is an interactive sculptural installation created by Amy as part of their residency at Mildmay care home. Amy worked with the digital agency Ayup to develop an app which invites audience members to scroll through artworks and experiences developed with collaborators in The Mildmay Collective. The working vending machine has been customised with the collectives logo and vends affordable artworks to members of the public. The app has been built into the machine and shows photographs, videos and short texts relating to the works and their contexts. If they choose, audiences can buy a version of the artworks to take home.

Vending Machine is a document of The Mildmay Collective’s work, and an artwork in itself, playing with the idea of dispensing art in a much more affordable and accessible way - like you would get a packet of crisps at a train station. In this way, Vending Machine becomes more than the sum of its parts and plays with the choices available in contemporary life. Just as the artists in The Mildmay Collective are the co-creators, so the audience members of Vending Machine are the people that bring this work to life, within the transactional relationship created by the artist. It was shown originally at the exhibition ‘Wheelin N Dealin’, The Printhouse Gallery, 2015.