How does it feel?

How does it feel?

Over the past 2 years I have been developing a collaborative film with my family, inspired by our experiences of adoption and reconnection.

Put up for adoption as a baby, my Mum didn’t know her birth family until tracking them down and meeting them for the first time in 2016. With two new aunts and an uncle, as well as a whole new extended family, we have begun a journey together of learning about who our family really is, where we came from, and how we live/have lived - not all too far away from one another.

Temporarily separated again like most families in the pandemic, during one of the lockdowns I held workshops over zoom. Talking about our pasts, separately and together, uncovering memories, and continuing to fill in the gaps, through quizzes about childhood tales and favourite chocolate bars, taking each other on Google maps tours and dressing up in domestic drag. I’ve been sharing parts of my participatory and collaborative art process with them, and they have been sharing their own stories with each other in turn. 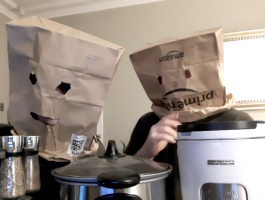 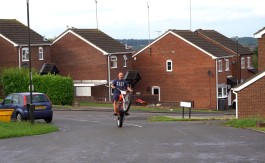 Together we will work towards the creation of a new film, examining nature vs nurture, play and re-performance as tools to collaborate and work across generations and walks of life. The film will borrow techniques from documentary filmmaking and combine footage that I have shot in interview style with workshop documentation and other experiments. Using humour, nonlinear or partial narratives, to show the multiple perspectives that make up a family, and the changing social mores that affect them.

Sharing a typically northern humoured, Irish descendant, intimate but not overly sentimental, working class Derby family’s journey into art practice. A relatable and engaging new work to think through what makes a family and what our histories and our families reflect back about ourselves, and our times.

4:3 A film about queer education, drag and television. 4:3 is the first work in a series that explores re-performance as a form or remembering, re-looking and re-learning, 2020 - on going

4:3 is a film which examines Amy’s experiences of growing up queer under Section 28 in a small northern town; with nowhere to go apart from television. Section 28 instated in 1988 declared that a local authority "shall not intentionally promote homosexuality or publish material with the intention of promoting homosexuality" meaning that homosexuality could not be taught in mainstream education.

4:3 is the former aspect ratio of televisions, and growing up 4:3 was Amy’s ratio, their limited square portal to a queer education. Using the few queer characters Amy sought out on telly, watched, rewatched, and studied as a child – from Willow & Tara in Buffy the Vampire Slayer to Ellen coming out to Oprah, this work explores re-performance as a form of remembering, re-looking and re-learning. 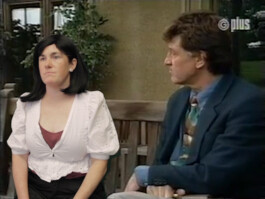 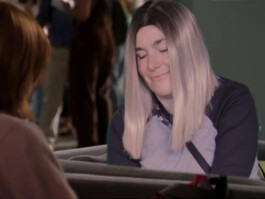 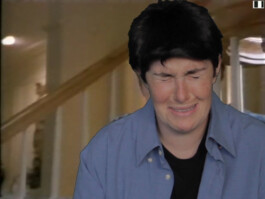 Did I fancy them or did I just want to be them? Like Lacan’s mirror stage, where children look for their likeness in things, but the mirror and stage have gone a bit bent. Through green-screen and a bad temporal dragging of these quintessentially naff, but precious moments in TV history, Amy hopes to simulate the queer imaginary spaces they created for themselves as a child.

Appropriating a mockumentary format, ELIZA is inspired by the lesser known, lesbian, working class, Victorian, 'poet of the people' Eliza Cook. Like unfolding a game of exquisite corpse to reveal an Alan Partridge style commentator, in the get up of a 19th century woman, with the cadence of a camp northerner: ELIZA drags both the viewer, the unsuspecting public and the artist back and forth through time to explore the overlapping edges of redevelopment, place and queer temporalities.

Like unfolding a game of exquisite corpse to produce the get up of a 19th century working class woman, the presence of Alan Partridge giving a tour of the home counties and the cadence of a camp northerner: ELIZA drags both the viewer, the unsuspecting public and the artist back and forth through time.

As the film’s name sake, the other kind of drag also originated in the 1800’s. When male performers wore petticoats to perform as women their petticoats would drag on the floor, so they referred to dressing up as women as “putting on their drags.” Since adopted by the gays, drag has historically served to inhabit, inflate and interrogate performances of gender and other fantasies. In ELIZA, Amy turns this technique on the unlikely but overlapping edges of development, place and queer histories (puts a bike pump into them, dons a coiffed wig and crawls inside).

Calling upon the character of Eliza Cook, a Victorian poet from Bermondsey with a ‘love for women’ that championed education for all, the Amy/Eliza hybrid takes us around Ingress Abbey - a stately home now swallowed by a housing estate - where Eliza wrote much of her work. Hybridity has also had its uses in queer history, assembling and gathering the parts of presentation you like and cobbling together something new, capable of slipping between. The artist's performance of Eliza is as though to draw a silhouette of the character and of Amy themselves over one another as a venn diagram. With the overlapping centre of Eliza as a self taught poet, Amy as self taught artist, both as queer, from working class backgrounds… but leaving room for the differences to seep out. Embodying a spillage of one moment of time into another and back again, messing with simultaneity to create ‘queer asynchronies’ Elizabeth Freeman) like ruptures in the way things are or should be. All the while settling in the rather familiar and comfortable to camera style mockumentary tropes - crash zooms and The Office type gotchya’s abound.

As in many ways Eliza was for her own time (a lesbian, a female working class writer), Amy’s performance is anachronistic to the modern day Ingress Abbey. Asking passersby if the Dartford Crossing is a drawbridge, pondering if nitrous oxide canisters could be solid silver and holding their petticoat up to run for the ice cream van. Mirroring the very incongruousness of the Abbey itself - a neo-gothic Jacobean-style 18th century country house now nestled amongst a 90’s interpretation of Victorian style homes, complete with driveways and double glazing of course. As if the same person that was responsible for casting Eliza with a Sheffield accent had about as much budget for the set, but it's real and people actually live there.

Ever shifting, the tour oscillates between a slightly sycophantic autobiopic (Amy/Eliza reading from their favourites of her own poems and detailing love affairs with actresses that didn’t turn out so well), to BBC social commentator or property developer selling you their dream of town planning. At once imagining what Eliza would have made of such an area with no social housing, whilst painting a sunny picture of an area where ‘everyone is just so friendly, you just don’t get this everywhere you know’. With development conglomerates setting their peepers on North Kent as London’s next overspill site Eliza/Amy pulls the viewer through the icky grey feeling of ever engulfing social and geographical redevelopment and change. Here Amy deftly draws the politics out of the ways areas, as bodies, can be classed, cleansed and gentrified. At the start of this short film, Amy/Eliza are literally and metaphorically locked out of the building and its history, and forced to give a tour from its periphery. As they say, ‘you have to look for the queer stories in the cracks’, and marginalised stories are often better told from the margins.